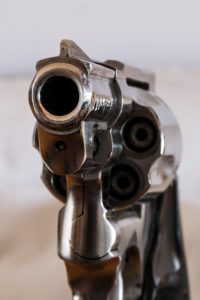 Ayn Rand has a problem with violence. I think that all anarcho-capitalist ideologies (of which Objectivism is certainly one) have the problem of violence.

The problem of violence for anarcho-capitalism is two-fold, the way I see it.

#1: Capitalism profits from violence. Indeed, it is impossible to divorce capitalism from violence. Time after time, capitalists have used violence to take things from the people who own them. Sometimes they do it directly, for instance, enslaving Africans to work their plantations. Mostly, they do it indirectly, though, such as supporting corrupt governments in Saudi Arabi who do the murderous repression of dissent against Western exploitation. At other times, it is done covertly, such as the CIA supporting the Shah of Iran and his brutal secret police in order to keep Anglo-American oil companies happy.

I’m not talking about the kind of coercion that drives anarcho-capitalists crazy, either. I’m talking about “shoot you fucking dead” violence.

Much of the profits of capitalism have their origins in bloodshed. This is particularly true of the essential oil industry, upon which all other industries depend.

#2: But anarcho-capitalists can’t admit this. If they do, they acknowledge that much of what we call capitalism must be seen as mere state-sanctioned banditry. At that point, they lose all claims to morality.

The solution is to ignore the fact that capitalism has frequently, and still does, profit from violence.

It’s the reason why Ayn Rand kept her philosophies abstract. She doesn’t talk about specific businesses, but an idealized form of economics where the ugly and violent exploitation of people all over the world doesn’t exist. To speak about any specific businesses would open the doors to speaking of the nasty secret of capitalism: all that blood all over everything. By keeping her philosophy free of specifics, she was able to ignore the role of violence in the growth and success of capitalist economies.