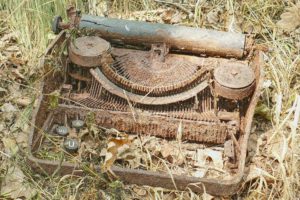 For authors? It’s hard, perhaps harder than its ever been. Between publisher consolidation and the adoption of “blockbuster” book franchises, a traditional publication is rougher than ever, akin to winning the lottery. And indie publication has allowed more writers than ever to enter the market, but as their numbers grow the odds of “making it” diminish.

Of course, we can fuss with the definition of “success.” It is a triumph to get a total stranger to read your work. I know this. But that is not the typical definition of success. It’s a tortured definition used by artists that has little bearing on how anything else is measured. Success in business is not selling ONE item, but selling enough to justify the time, effort, and expense of the whole enterprise. Success is getting the widespread respect and recognition of one’s peers. And most definitions of success hold the promise for a future of increasing rewards – of a reasonable progression in prestige and money. Artists generally and writers specifically are unlikely to ever get anything resembling “success” as measured in any other, non-artistic field.

I love to write, but there’s a lot of stuff that comes after writing that I do not enjoy. I love research, I love writing. I can tolerate editing and formatting. I enjoy getting art for my books! I despise marketing and promotion. I am disgusted with traditional publication whose competence is low, which continues to attack independent artists. And after publication, a writer is expected to market and promote their work, which I hate, and which is also opposed by the big publishing outfits. Which is normal for writers, I understand, and if there was a reasonable expectation of success – in the normal sense of the term – I could grit my teeth and bull through it. There is not.

For writers that aren’t connected, chance plays the largest role in determining who is successful because there are so many writers who are so good! While all the kittens are cute, the big five publishers have no use for the whole litter, and select one of the cute ones, usually one close at hand – and leave 999 siblings behind. The fault lies not in the litter, but the needs of the publishing industry.

This week, these simple truths almost broke me. Writing is the only thing I’m good at – and I’m very good at it. But success as a writer has eluded me.

The only thing that keeps me at it is the support of my wonderful spouse and friends. I managed to retrench myself for the coming battles, but it is hard. It is hard to have great ideas and know that they will likely get you nowhere, to know that there is an audience out there for your work, but be able to communicate with them!