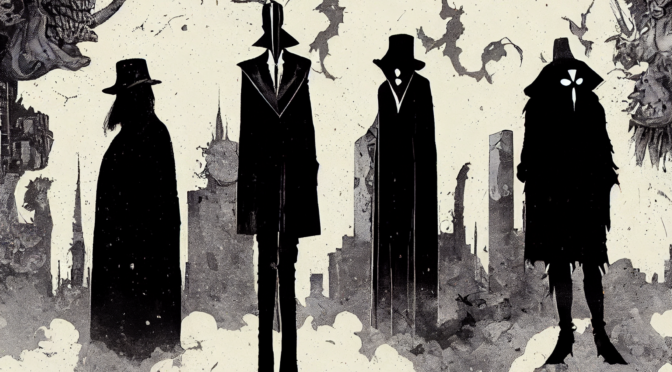 After reading that bit about Adobe using AI art tools, I read an interview in GQ with Alan Moore. Reading it didn’t spoil my appreciation of Moore’s work, but, man, he’s a selfish little asshole.

Of course, the interview touches on Moore’s comic works for which he is best known. And I have no issue that he left the field because he felt he was treated like garbage. I mean, sure. And I harbor no ill will that he doesn’t want to see his works adapted to the screen.

What does bug me is how he just asserts that no one UNDERSTANDS HIM, MAN. So, in his example, I will be talking about the Alan Moore-penned Watchmen graphic novel and its movie adaptations and TV spinoff in a general way.

In the GQ interview and elsewhere, Moore says that people don’t understand his work. Let me break down what Watchmen’s intent was, per Moore, and fairly transparent to me, at least. If superheroes were psychologically “realistic,” they would be fucked up and a danger to society.

So, let’s talk Nite Owl. He’s based on Batman, but in Moore’s world, he’s a neurotic, impotent weirdo. That’s what we’re supposed to take from Nite Owl.  Ha, ha, isn’t it funny that I made a Bruce Wayne-like character who is an impotent weirdo. He isn’t cool, except…

C’mon, Alan. Sure, he can’t get it up unless he’s wearing a costume and kicking the shit out of thugs and bullies, but when he does that, he gets to fool around with Laurie Jupiter. You know, a strong, beautiful, interesting, and exciting woman. His “punishment” for being a neurotic, impotent weirdo is hot sex and fascinating life.  That’s pretty cool and YOU DID THAT, Alan.  You.  That isn’t some strange reading of the text.  You made it so the impotent weirdo hooks up with the smoking hot superheroine.

All writers have authorial intent, but given Moore’s literary tastes, he understands that every text is going to have multiple interpretations based on the needs, tastes, circumstances, etc., of the readers. But his objection that we should not find the characters in Watchman to be cool is nuts. He wrote them pretty fucking cool.

And they are so cool because they’re fucked up. Before Moore (and the equally influential The Dark Knight Returns published in the same year, written by Frank Miller,) Batman and Batman-like characters were crushingly dull. Batman was nothing but Sherlock Holmes in a weird suit without a cocaine addiction. He and characters like him were blandly omnicompetent. Moore’s Nite Owl made Batman-like characters interesting by linking his sex drive to violence and fetishism, just as Miller’s Batman made him more interesting by introducing madness and rage into Bruce Wayne’s personality.

This is, I think, obvious. He wrote really interesting characters. Yes, they were flawed, deeply flawed. But after generations of squeaky clean, eat-your-vitamins-and-say-your-prayers superheroes, the flaws were what made them fascinating.  It is what made them cool.

So, he took his success and blamed the people who loved his writing for loving what he did. No, no, he said, I am going to ignore – with torturous reasoning and specious rationalizations – that I made these characters interesting and loveable by making them flawed. I will ignore that they are fascinating people with incredible lives and focus on you for failing to focus solely and exclusively on how they’re emotionally damaged weirdos who are dangerous to society. I will ignore that I wrote them as exciting and cool characters and say you’re idiots for focusing on the “wrong thing,” even though I very well know there is no one interpretation to any story, and artists cannot control interpretation once they have released the work into the wild.

OK, but there’s more. Alan Moore then attacks those creators who have interpreted his work into other mediums, notably Zac Synder.

I will take this time to point out that Moore brags that he has never seen any of these adaptations. So, he’s literally talking about things he has learned secondhand. Moving on.

So, here’s the thing, though, about such interpretations. Most artists would DIE to be in the position of having written something so influential that decades after it’s done, people are still so damn inspired by it that they’re creating media – successful, critically and culturally acclaimed media – based on their work. No, no, to Moore, all the artists who are inspired by his stuff and adapting it to other mediums are idiots who are ruining his work.

So, his ranting against people who have interpreted his work comes off as selfish and childish and hypocritical. Of all the artists who have ever lived, should his art not be interpreted by others? Even though his career is made and defined by such reinterpretations?

Hey, I still love his stuff, but the dude needs to take a look at what he’s saying. People aren’t wrong or dismissing his work or the points he raises by thinking Nite Owl and Rorschach and Silk Spectre are cool. Artists who interpret his work differently than he might do, or at all, aren’t doing it to hurt him or damage his creation. Indeed, he has built his career on doing such things himself.

C’mon, Alan. Grow up. If nothing else, apply the same standards to others that you want them to apply to yourself.