I had mostly just thought to give The Morning of the Magicians an awful review and move on. Most of the book is profoundly stupid, and often in factual error. (For instance, Piri Reis was NOT a 19th-century admiral, but a 16th-century one thus could have presented the US with anything. Radio waves and gamma rays are both forms of light, so, yeah, you can compare them. Plus, computers are binary and human-style intelligence is analog, not the other way around.  The book’s errors are numerous and multifaceted, obvious and subtle, and even worse is the broad mischaracterizations, equally untruthful oversimplifications, and the extent to which facts are taken out of context.)

However, inside the brutal stupidity that is most of the book are two interesting parts.

First, Pauwels suggests that a being of superhuman intelligence wouldn’t need to hide. Neither would an organization of such intelligences. What they said to each other would be incomprehensible to ordinary humans, much in the same way that dogs don’t understand what humans say. It would simply be lost on us.  For a fiction writer, this is a highly interesting idea.

END_OF_DOCUMENT_TOKEN_TO_BE_REPLACED

It’s not a good book. For me, as a writer, researching science-fiction horror, it was fairly useful but it is not good.

I’ll jump right to the biggest problem with The Reich of the Black Sun – it’s unintentionally pro-Nazi. The thesis of the book is that Nazi scientists when they discarded as “Jewish science” relativity were able to make incredible scientific and technological advances – including anti-gravity and perpetual motion machines that could power long-ranged submarines – even though the Nazis lacked the wealth and freedom of the West (and, particularly, the unbombed United States that benefited from the immigration the largest portion of Jewish scientists fleeing the Nazis). That’s not an obviously racist thing to think, but it as I read the book, it became increasingly anti-Semitic: the only thing holding back science from technologies like anti-gravity and free energy was the pernicious influence of “Jewish science.”

I don’t think this is intentional on Farrell’s part, just the ignorant blindness of most conspiratologists. Like most conspiracy theorists, Farrell is driven by his passions past the point of all reason. There is no evidence of sympathy for Nazi goals in the book, merely an ecstatic gushing about his line of reasoning that puts Nazi scientists on divergent lines of technological development that lead to amazing places.  His prior work is a bizarre theory that the Giza pyramid is an alchemical “death star,” and that it was used to destroy a planet that threatened the earth.  This guy doesn’t seem to be ideological, just passionate about his untrue beliefs.

END_OF_DOCUMENT_TOKEN_TO_BE_REPLACED 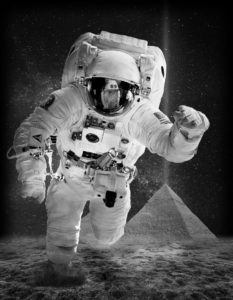