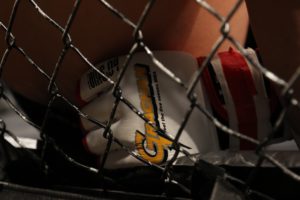 If McG loses? No biggie. He walks away with his tens of millions of dollars, retires, or plans his next fight. Likewise, for Mayweather, if he loses? The rich get richer. He’ll still be regarded as one of the best boxers to have ever lived – and, if you’re a betting type, bet on Floyd.

Still, what happens to boxing if Conor somehow wins?

(Not for lack of ability, but a lack of good reasons. If you’re a world-class boxer, going into MMA is a pay cut. This is especially true if you don’t have access to a good mixed martial arts camp. But you can be a championship wrestler or kickboxer and be broke – the pay in MMA is much higher. So elite boxers tend to stay in boxing, rather than try to learn new skill sets for a tough sport that they might not take to. Kickboxers and wrestlers have little to lose and try more often.)

And while some mixed martial artists have boxed professionally, none of them have done it at a high level.

If Conor wins, though, some people might conclude that mixed martial artists are better at everything. There’s reason to think that, if one looks into it. World champions at Brazilian jiu-jitsu – like Jacare Souza – do very well in MMA. Alastair Overeem won the K-1 Open Weight Grand Prix in kickboxing, the highest accolade in a kickboxer’s career at the time. Henry Cejudo won a wrestling gold medal at the Olympics and is a very talented mixed martial artist. I believe the reasoning might flow the other way if McGregor beats Mayweather.

If Conor wins, to me, one of the takeaways is that boxers aren’t even the best at their discipline. That the only reason mixed martial artists haven’t taken over boxing is that they don’t want to do it.

It is also an open question of how good a boxer McGregor is. Unlike boxers who have fought in MMA fights, Conor has studied boxing for years. He has exclusively studied boxing, now, for months. How good can a person who is already a pretty good boxer – and potentially a great one – learn in a year of intensive study with the best boxing coaches in the world? I dunno.

Though, almost wholly undiscussed, is the simple fact that Conor McGregor is twelve years younger than Mayweather, that Conor has been training to fight several times a year while Mayweather has been retired. The old get old, and the young get stronger, after all.

While it is very hard to overlook that Mayweather is a 50-0 boxer of peerless technique, and Conor McGregor has never fought in a professional boxing match, the age thing keeps coming back to me. Motivation, too. How Mayweather is just doing this for a last big payday – that he knows that losing to McGregor doesn’t hurt his legacy, it doesn’t make anyone doubt his boxing skills. After we calm down, people in the know will simply say that Floyd was too old, Conor so young.

To the rank and file who buy boxing PPVs, though, it will look like a mixed martial artist beat the best boxer in the world. It will look like mixed martial artists are just better fighters. The fact of the age difference between the fighters will be a niggling point for the super-fans of both disciplines. The possibility of an unmotivated Mayweather showing up will be argued deep on the Internet, but the headlines will say, effectively, “MMA fighters are better than boxers.”

For Conor McGregor, the UFC, and MMA, there are no downsides to this fight. Win or lose, Conor is a great mixed martial artist. And if Conor loses? You know the first thing he’ll say is, “I fought Floyd in his house, he should fight me in mine. Let’s do this, again, in the octagon.” He’ll remind people the only reason he lost is that he couldn’t use most of his skills.

For Mayweather, personally, there is no downside. Win or lose, he gets richer.

But for boxing, itself? Which is already struggling with unfair comparisons with mixed martial arts? I think it’s possible that a McGregor victory will change the way people look at the sport. Not Mayweather – he can go back to his wealthy retirement. Other boxers? From that point on, they’re going to have to explain why people should care about boxing if the best boxers are, clearly, in mixed martial arts.

While the odds are still on boxing’s side, the bout will be very high risk for the sport of boxing.

PS: If Conor wins, the way I see it playing out is that boxers will invite other MMA boxers to do boxing matches. You’ll see the Diaz brothers in a boxing ring in a hot minute, for instance. Overall, the boxers will win, of course, and might be able to roll back the perception that they’re not the best boxers. Once young, hungry boxers are fighting MMA fighters in their wheelhouse, I have no doubt what the outcome will be! But I don’t know if it would be enough to recover from the headlines that the greatest boxer of all time got whipped by someone from another sport, though. In the short run, too, boxing will be taken less seriously as an independent sport.

PPS: I will point out that Conor knows at least some of this. He knows if he beats Mayweather, he will have a legit claim as the greatest unarmed fighter of all time. Expect Conor to arrive highly motivated, both for the benefit of his pocketbook and his legacy. It is possible that the winner of a McGregor-Mayweather fight will be determined by the motivation of the fighters. Floyd must avoid arrogance (!) and train like he means it.