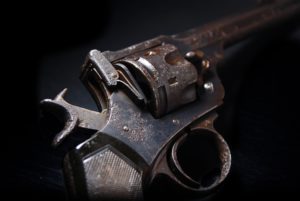 And they’re all batshit crazy.

Additional context is that I was raised in Nevada. The most recent example of the kind of nuttiness is the recent standoff at the Malheur National Wildlife Refuge. All of that nonsense arose from a longstanding feud between the Bundy family and the federal government in Clark County, where I lived as a youth. From fairly early in my life, I’ve been hearing about Nevada ranchers who have been breaking the law on federal lands, mostly grazing cattle illegally, but also illegally building fences, and even “accidentally” destroying federal buildings. The Bundys are adherents of the sovereign citizen movement, which insanely asserts that individuals are not subject to any law. That’s not a typo: they think that laws have no authority over the individual, whom they regard as sovereign. Closely related to the sovereign citizen movement is the Posse Comitatus, a now defunct radical right-wing racist paramilitary organization which is also the breeding ground of Christian Identity politics, which figures heavily below. So, even before I learned of the conspiracy end of things, Las Vegas newspapers had stories of people like the Bundys engaging in feuds with federal agents over land rights, heavily sprinkled with sovereign citizen lingo and Christian Identity politics. I guess it is little surprise, then, that there are nutso militias in Lord Goblin! Militia-style movements have been the background noise to my life.

Typical – perhaps prototypical – of the militia breed is the Michigan Militia. Founding by a fundamentalist pastor, Norman Olson, for fear that President Bill Clinton would strip Americans of firearms ownership.  Or that’s what it says on the tin, the actual ingredients that go into the mix are far more odious.

One of the precipitating factors in forming the Michigan Militia was the Bureau of Alcohol, Tobacco, and Firearms raid of the paramilitary group (and this is not a made-up name), The Covenant, the Sword, the Arm of the Lord. . . who was manufacturing automatic weapons for the oncoming “racial holy war.” (For the record, the way that the group abbreviated their name was “the CSA.” Their racism is not subtle.) The CSA was part of the Christian Identity movement, which is the unofficial ideology of the Aryan Nations.

The leader of the group, James Ellison, was also a convicted polygamist, and a member of the Aryan Nations. He would be convicted of his crimes, but to people like Norman Olson, the takeaway wasn’t those racist bigots making machineguns to kill everyone who wasn’t a white Christians would result in the enforcement of the law – but that the law was corrupt because it prevented racist zealots from their “racial holy war.”

Not for nothing, James Ellison was also a close associate – even teacher – or Timothy McVeigh, the mass murderer guilty of the Oklahoma City bombing. Later on, Ellison would turn stag and rat out other Aryan Nations members for a reduced sentence. I have no idea if he’s still alive. The Aryan Nations is not a forgiving group.

The second precipitating cause of the formation of the Michigan Militia was the Ruby Ridge raid. Granting it was a bungled operation, it is important to remember Randy Weaver tried to sell sawed-off shotguns to federal agents. In addition to illegally modifying firearms for sale, Weaver and his family were apocalyptic millenarians: they believed that the world would end in, again, a “racial holy war.” The feds that bought the illegal guns met Randy Weaver at an Aryan Nations rally.

The Michigan Militia was – and is – a xenophobic dominionist Christian apocalyptic group, founding out of fears of non-existent government tyranny, far-right interpretations of Christianity, and closely allied with violent fringe organizations, either preparing for or attempting to create a “racial holy war.” Like all bigoted organizations, they use heavily coded language, but the numerous links between private militia groups, right-wing hate organizations (particularly the Aryan Nations and the KKK), and radical Christian Identity ideology are too numerous to ignore.

In the interest of absolute fairness, when a sufficiently strong lights get shone on a militia group, it tends to deradicalize.  Or, more exactly, reform under a new name.  Again taking the Michigan Militia as an example, after the Oklahoma City bombing, and during a time of intense scrutiny of private militias, the founder of the Michigan Militia said that the bombing was done by the Japanese in retaliation for a terror attack in Japan that the militia’s leader said was a US black ops.  It was a mile too far for the militia, combined with the media and law enforcement scrutiny, and the Michigan militia voted their founder out of the militia.  This lead to the rise of other, more radical militia groups that had ties with – and often shared members with – the Michigan Militia, such as the Hutaree (which is the specific model for the various militias in Lord Goblin).  The Hutaree are a Christian Patriot movement, which says that the US has turned its back on the ideas of the American Revolution and America’s Christian heritage.  But the same people and ideologies keep coming up – the Posse Comitatus, Christian Identity, sovereign citizen, the Aryan Nations.  Every time enough light shines on these people to illuminate them, they scurry back into the shadows, switch their coded language, and start over, again.

In the modern day, it is further diffused through the online communities of “preppers.”  If you can stomach it, I suggest the TV show “Doomsday Preppers.”  It is a bonanza of right-wing paranoia, and as much coded language as I could stomach.  When a white family outside of Atlanta talks about chaos starting “in the cities,” and then has their attack dog practice on a black person. . . well, the code is fairly easy to see.

It is out of the Midwestern private militia groups that the seeds for Lord Goblin’s militias were formed. I left out the backstory as irrelevant, and because Channing and Reece would be unaware of the history of these groups because they’re not obsessive conspiracy theory types.  But the attitude and style are hand-me-downs from groups like the Michigan Militia, Hutaree, the Posse Comitatus, the Bundys, and their modern kin in the radical right-wing, neo-Nazi alt-right movement and their prepper kin.