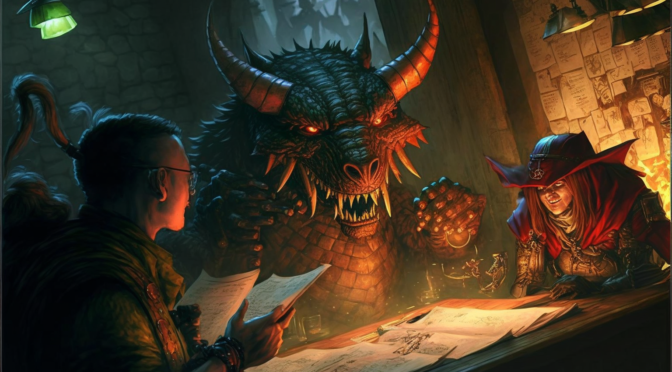 So, the company that owns D&D is mega-toy supplier Hasbro. But before Hasbro owned D&D, it was owned by Wizards of the Coast (WOTC,) which still exists as a Hasbro subsidiary. About twenty years back, WOTC released this thing called an Open Game License. Under that license, other game companies could publish stuff using the D&D rules.

At the time, D&D was sorta washed up. It wasn’t the biggest table-top role-playing game (TTRPG) anymore, with its rules being considered hopelessly old-fashioned and out-of-date. The OGL came with a new set of rules, D&D 3.0, which was seen as a dramatic improvement on that front, too. But the OGL made the game because it meant that any budding game company could make a supplement for “the most popular role-playing game in the world.” D&D returned to the top of the heap with tabletop role-playing games, consistently commanding nearly monopolistic control of TTRPGs. Right now, about 75% of all TTRPG sessions are D&D – INCLUDING all the OGL, near-D&D stuff out there.

Recently, Hasbro (through their now subsidiary, WOTC) has tried to “deauthorize” the OGL. They did this in a really clumsy way that would allow them to steal people’s intellectual property and take up to 25% of their income. It was nuts. The fans objected, so Hasbro rewrote the “new” OGL, which is a lot better but still pretty awful. D&D fans are in revolt, and they are confused as to why, after twenty fucking years, this is happening.

Soon, a movie is coming out, “Dungeons & Dragons: Honor Among Thieves.” It’s a big-budget blockbuster-y movie. D&D has gone down this road before, but every previous attempt was awful. I mean, the previous D&D movie, creatively titled “Dungeons & Dragons,” is in the so-bad-it’s-entertaining territory. There were two other D&D movies after that that weren’t even that good, they were just plain bad. But this time, they’re getting real directors, and certainly, the environment for fantasy movies has changed since their first attempt to a blockbuster movie. This isn’t some half-baked production. It’s got real stars and real directors!

And there’s a LOT of D&D content out there. If I were a movie studio and looking for a Marvel Cinematic Universe kind of deal, yeah, I’d be looking at D&D. There are hundreds of D&D novels, thousands of D&D comics, and a whole bunch of video games, too. While no D&D TV show or movie has been anything other than appallingly bad, well, a bunch of those books was best-sellers. Some people who have never rolled a d20 in their life know exactly who Raistlin and Drizzt are and can go on at great length about their origins, backstories, and adventures.

Hasbro sees piles of money, the likes of which a game company has never before imagined. They’re looking at a world where, with just a little luck, names like the Forgotten Realms and Dragonlance are as famous as Harry Potter or Lord of the Rings. They’re looking at profits in the billions, in the tens of billions.

And they know that because D&D is what it is, and the OGL is what it is, a lot of the content produced by those game designers is based on the same rules as D&D. A lot of it is… quite like D&D content. Oh, the designers of OGL games will go on about the differences between their stuff and D&D products, but it’s almost all fantasy, and it’s all based on the same rules as D&D. The most famous fork of the OGL is a game called Pathfinder, whose narrative constructs are completely ripped off from everything about D&D. You’ve got humans, elves, dwarves, halflings, etc., going around looking for treasure in dungeons.  It’s very consciously modeled on D&D in style and focus.

So, here you are, sitting on what could be a media empire. I’m not joking. This could be as big as the MCU. Probably won’t be, but it could be, they have enough stuff to do that, and the MCU is, itself, looking long in the tooth. (And, frankly, D&D’s bad guys are better than the MCU’s. Man, you could go a long way with Stradh alone, and you’ve got dragons with demons for hearts and evil gods that chop off body parts so that crazy mortals will make themselves into weird necro-cyborgs and stuff. It’s off the chain.) This is a good time for something new-yet-familiar to really take off. So, Hasbro is looking at a potential media empire.

Do you know what they do not want? Companies claiming that the D&D media ripped them off. They want to protect this media empire from claims – real or not – that D&D media is based on their stuff. Because a lot of it looks a LOT like D&D stuff, anyway.

Additionally, you’re looking at the chance to crush all opposition. Remember when I said that 75% of all TTRPGs are already D&D? What happens to that number with a Marvel-style cinematic universe? With two or three hit movies a year and one or two TV shows a year? What happens to every other non-D&D game? Why would you want to give even a tiny slice of that to anyone else?

If you’re a corporate bean counter, the decision is clear. You need to change the OGL to make it impossible for anyone to come at you. The OGL, at the bare minimum, must include language – or potentially include language – to prevent Hasbro from being sued once it starts raking in those big Hollywood bucks (should that eventuality come to pass.)

And, yeah, they annoy a lot of current gamers to do that, to be free and clear for purposes of building a media empire.

So, I believe that the OGL will probably die, one way or another. Some of the bigger companies using the OGL say they’ll fight it in court, and maybe they will, but the courts tend to side with the people with the most money in these situations. And while the OGL says it is irrevocable, in practice, courts kinna hate that language that binds all future property holders into perpetuity, that it is a poison pill. Hasbro will say that they played along with this legacy license for a generation out of the kindness of their hearts (which is mostly true, I should add, they could have stopped publishing under the OGL ten years ago without any problem) but that such an out-of-date concept should no longer bind them. But even if the court case succeeds, the number of people publishing under the OGL will evaporate because Hasbro will have made itself clear – it is coming for you.

This will further establish the precedent that Hasbro will fight for this… and they’re a billion-dollar company. It’s one thing to say you’re going to sue someone that’s literally a hundred times richer than the richest company making OGL products, it’s another thing to pay your lawyers for the years and years it would take to contest such an action.

But that’s why Hasbro is doin’ this, IMO.