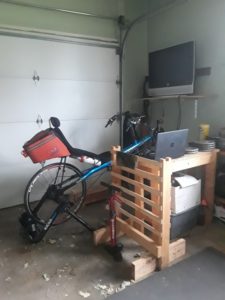 I almost did that one. I did several long rides – between sixty and eighty-five miles – at an average speed above 20 mph. And then there was this perfect October day. Not too warm, no real wind, with dry roads. Yeah. I was gonna fuckin’ wreck it!

It was not to be, even though about 32 miles into the ride my average speed was 22.7 mph. I was looking at a good fifty or so miles where I’d be able to keep that pace – a long, flat stretch was before me, and on the return leg, the wind would be at my back. I felt great. I believed that I could keep a pace of 21 mph – it felt doable. It seemed impossible that I wouldn’t do the century in under five hours. I’d have a two to five percent margin of error, I felt.

Then I had a front wheel blowout at 23 mph. It was a low-side crash – which is true of almost all wrecks on recumbent bikes, thank goodness – and I landed on my hip in the rough. Bad news, sudden stop. Good news, no road rash. I didn’t even tear up my spandex. A friend calculated the force from the landing as being slightly more than a .357 Magnum shot to my ass. Or a Major League Baseball slugger hitting me three times with a bat. My left hip got a massive hematoma. I felt like I’d grown a third butt cheek. Well, I also trashed my derailleur hanger, so I had to walk the bike to a park and called for help. By the time help arrived, I was in some pain. Eventually, I betook myself to the ER and found I had a sprained hip, some contusions, and likely bone bruising on my femur. (I also had a sprained ankle, but that was far, far down the list of problems.) I have healed nicely, but I didn’t finish my sub-5 hour century and I lost three weeks of serious riding when I was at my peak strength for the season.

By the time I was back in riding shape, the weather had turned. We went from having 80s to it being in the low 50s with lots of spitting rain on the warmer days. Plus, as fall moves on, the days get shorter and going out for long rides becomes less attractive all around.

As a result, I’ve made what is called in cycling circles a “pain cave.” (See picture.) Well, I don’t think mine is a pain cave. More like a discomfort grotto. Perhaps I am insufficiently macho! Or, perhaps, “pain cave” reeks of inanity. Let’s go with the second.

Anyway, I got a smart trainer pointed at a TV set to run, well, cycling MMOs off an old laptop. The one I’m using right now is Rouvy because, unlike the biggest one, Zwift, Rouvy is exclusively real-world courses. Your trainer measures your power (and smart trainers “react” to the course, with resistance growing as you go “uphill,” which is all the time because uphill routes are heavily favored by virtual cyclists, apparently) which Rouvy converts to a virtual speed which you then use to “ride” various routes all over the world. Thus, you can use it for a kind of virtual tourism. One day you can “ride” in the German Alps and the day after that you’re spinning up a mountain in Colorado.

The good part, for me, is that my bike goes on and off the trainer easily. This past summer has been frustrating because I enjoy consistency. I like being able to say, “OK, on Monday, Wednesday, and Friday, I’m gonna ride.” The weather kept getting in the way! But with Rouvy (or some other game if I tire of it), I get enough interaction with the environment to enjoy a being on an indoor bike for a couple of hours. If the weather sucks, okay, I just ride indoors! I can keep it consistent.